It Isn’t Perfect, yet the Bleakest Live-Action Batman ever. The Batman is a bleak, slow-burning, political, and the most detective-Esque Batman film ever made “which only gets better with each viewing”. The Biggest Perfections of The Batman :

It’s not an exaggeration when I say that this movie is first-rate on every level, from the cinematography, score, direction, and production design to the performances. It was Matt Reeves’ reimagining of Batman that all Batman fans wanted to see on screen, coupled with Robert Pattinson’s outstanding performance, which made the film a “fan-favorite Batman film”. In addition to Pattinson’s performance, Paul Dano as The Riddler, Zoe Kravitz as Catwomen, Jeffrey Wright as Gordon, Colin Farell as Penguin, and others in their respective roles have brought comic-book characters to life.

Unlike the previous depictions of Batman and Gotham City, Matt Reeves’ depiction is trailblazing, dystopian, gritty, noir, and pessimistic, making The Batman seem a lot more fresh and modern without falling into staleness for the most part. In fact, I’ll even go as far as to say that The Batman’s Gotham City representation is superior to The Dark Knight trilogy.

Regardless, Matt reeves wasn’t lying when he said that his film was inspired by Se7en. The likeness of Fincher’s films can be clearly seen on the screen, and it is evident that the basic plot of the film was directly drawn from the classic thriller: Se7en, and yet, influenced by another Fincher film: Zodiac.

The Imperfections of The Batman:

Despite its perfections, The Batman suffers from some imperfections to some extent, and I consider the final act to be the biggest flaw of the movie.

Although I appreciate the character development and importance of The Batman’s third act. The final act of the film did not align nor harmonize well enough with what the film was trying to achieve before. Look, I’m watching an outright noir detective slow-paced movie, and then suddenly, I’m seeing what other superhero films already have done. Up to the final act, the film was extraordinary and broke new ground for superhero films, but it appears the studios forced the movie to go back to its old ways (as if the studios intervened and told Matt, “Oh yea, we need lots of action sequences and he saves the day and becomes a beacon of hope, which we’ve already seen in a way”).

Basically, I’m saying the third act didn’t feel natural to me for what the narrative had been up to that point, rather it appeared forced, coerced – as if it was a studio decision. Even if it was “character development”, that totally could’ve been done the other way around. Not everything has to do with saving the city. Characters can be developed without destroying cities, too, even when they are alone in a room. The final act simply drifts away from the film’s tone and from what has been established as ‘new superhero storytelling’. Putting it simply, the final act violates the tone and narrative of the ‘noir-style detective drama’.

In addition, The Batman suffered from a substantial degree of overarching emotional detachment, as well as from Batman’s unripened romance with Catwoman. The Dark Knight vs The Batman:

Taking all these factors into account, if I were to play the comparison game. I really don’t know, but I would say “what Nolan’s trilogy lacked is what you see in The Batman, and what The Batman lacks is what you see in Nolan’s trilogy.” Although from my point of view, The Batman falls under The Dark Knight trilogy, I am sure it still rests among the 25 Best Comic-book Movies of All Time. 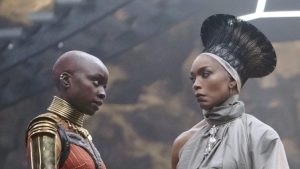 Black Panther: Wakanda Forever Review: Not Without Its Flaws