A New York-based company, Synchron, created a device called the Synchron Switch that allows patients to control their iPhones and iPads with their brains.

According to Semafor, an array of sensors known as a “Stentrode” is inserted through a blood vessel in the top of the brain. It is operated wirelessly through the Synchron Switch on the patient’s chest.

A former Melbourne software salesman, Rodney Gorham has debilitating disease ALS, which severely impacts his physical abilities. A report indicates six patients have been fitted with the Synchron Switch, including Gorham, the first patient to use the device with an Apple device.

According to Tom Oxley, Synchron’s co-founder and CEO, “We’re excited about iOS and Apple products because they’re so ubiquitous, and this would be the first brain switch input into the device.” On the iPad, Gorham turns his thoughts into action with the Synchron Switch.

Semafor reports that Gorham’s iPad records the motion of his foot as a finger tap, allowing him to send single-word text messages using his Synchron Switch.

Also, Synchron is the first company to receive FDA approval for conducting clinical trials for computer-brain implants. According to the company, which has raised $70 million in venture capital and other funding, the implant and maintenance costs are paid by the company.

As of now, Synchron is keeping things simple. The device isn’t trying to force patients to play pong or type 20 words per minute with their brains. Instead, it trains it to detect the foot tap signal as a brain signal. 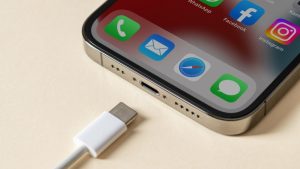